Want to try an alternative to AdWords?

MVLA Digital are Bing Ads accredited professionals – give us a call if you’re interested in getting started, complementing or replacing existing PPC traffic – we are seeing some really great results with Bing Ads, especially in hyper-competitive industries. It’s not uncommon to see conversion costs decreasing by 50%+ vs similar AdWords campaigns.

Bing Ads VS Google AdWords Side By Side Comparison – October 2016

An UNBELIEVABLE 1683% increase in profit… Conversion rate increased by 387%…

We manage the PPC efforts for a client who spends in excess of $20,000 a month on his digital marketing efforts.

We’ve optimised his AdWords campaign for a great ROI despite serious competition, and over the last 6 months we’ve been running a Bing PPC campaign to ensure he’s not missing out on any sales and to see how the two PPC behemoths stack up in the Australian market.

The results were staggering…

In most cases, we recommend Bing Ads as a complement to an existing AdWords campaign – depending on your business. For example, industries such as financial services have a very wide reach on Bing (source). Some SMBs who reach their ad budget every month might find Bing more profitable and eventually allocate the majority of their spend accordingly.

Our Bing PPC campaigns are underpinned by the MVLA Digital online marketing ethos – gaining an ROI on your investment.

We’re always excited to talk to anyone about alternatives to the ‘norm’ – we’ve also run campaigns on 7Search, Infolinks, Adsmonster, and many others.
Contact Us today to schedule a free examination, no matter whether you’re thinking about starting or already have a campaign. We’re here to help you achieve an iteratively more profitable, carefully orchestrated, positive ROI Bing PPC campaign.

How does your digital marketing compare to your competitors? Are you leaving money on the table?

For Q1 in 2017 we're offering a complimentary SEO + Competitor Analysis.

We'll use our bespoke online marketing methodology to manually test things like: 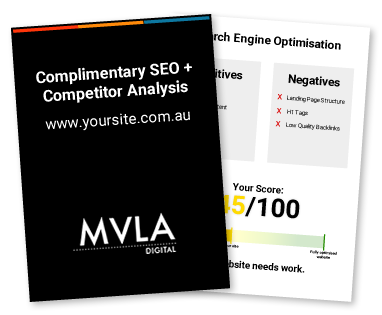 This offer is obligation free and also includes next steps and recommendations for your website.

For more information about our programs or to have a chat with someone about your digital marketing presence, please fill out the form below and we’ll get in contact with you.